If these two charts don't piss you off, you just might be a billionaire.

If these two charts don't piss you off, you just might be a billionaire. 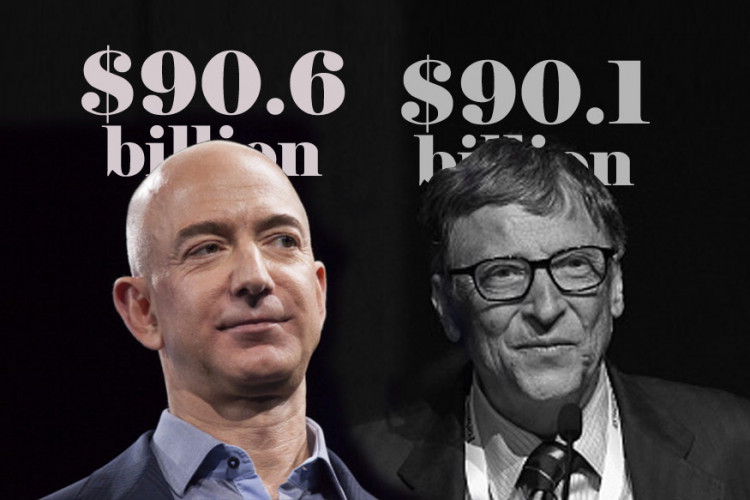 The massive income inequality in the U.S. and globally is a topic that everyone from political candidates to billionaires are talking about. Bernie Sanders said recently that "billionnaires should not exist." Good old Bernie. Mark Zuckerberg, who, with a net worth of $69.8 billion, according to Bloomberg, recently stated “I don’t know if I have an exact threshold on what amount of money someone should have but at some level no one deserves to have that much money.”
Bloomberg Businessweek developed a chart that shows the breakdown of wealth in the world, and gives ranking of wealth from the poorest (-2) to the richest (11) . Everyone in the world therefore has a “wealth number.” The chart makes it very clear just how extremely one sided the world's the distribution of wealth is. 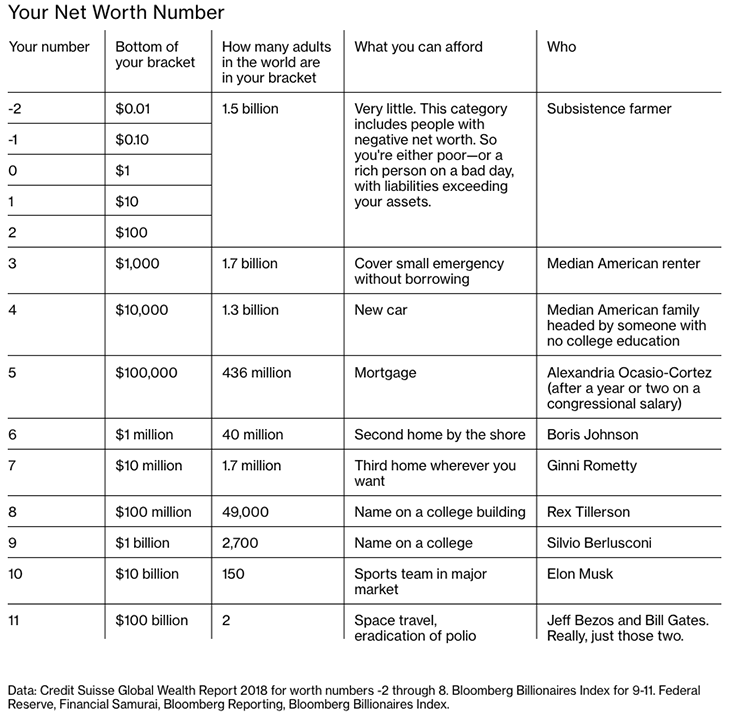 Scoring an 11 are just two multi-billionaires in the world: Jeff Bezos and Bill Gates. That Businessweek ranking means they have $100 billion or more. In case you didn't know, one billion is a thousand million.)
There are 150 people world-wide with a wealth number of 10. To hit that bracket you need a net worth of $10 billion to $100 billion. The chart names people like Elon Musk with a 10. Ten's can afford to buy a sports team in a major market, and some do.


Near the middle of the chart's range are the 1.3 billion people who have a wealth number of 4, a net worth of $10,000 to just under $100,000. Generally speaking, this bracket describes the median American family which has no college education and can afford a new car.


At the lowest end of the scale, 1.5 billion adults qualify for brackets of -2 through 2, meaning they have a net worth of less than $1,000. This includes people with a negative net worth. These people are, for example, subsistence farmers and can afford “very little,” according to the chart. It explains, “So you’re either poor—or a rich person on a bad day, with liabilities exceeding your assets,” according to Businessweek.
So how do the numbers break out? According to an Oxfam report published in January of 2018, the world’s wealthiest 26 individuals had the same amount of wealth as the poorest half of the entire world's population. (That’s down from the 43 wealthiest people the year before, by the way. It's getting to be an even more exclusive club.)
During the same period, the wealth of the world’s billionaires increased by $900 billion ($2.5 billion per day), while the wealth of the bottom half of the global population (3.8 billion people) fell by 11%, the Oxfam report found.
So how can it happen that the world's billionaires could increase their wealth by $900 billion while half of the world population came in 11% down? Steven J. Douglas, Director at Porte Brown LLC, an income, gift, and estate tax planning and consulting firm in the greater Chicago area posted a chart from the Washington Post that explains at least part of the picture. It seems that as the rich get richer, they also pay taxes at lower and lower rates  year over year. And in 2018, for the first time, the average effective tax rates of the 400 wealthiest families are lower than the bottom 50 percent of U.S. households. 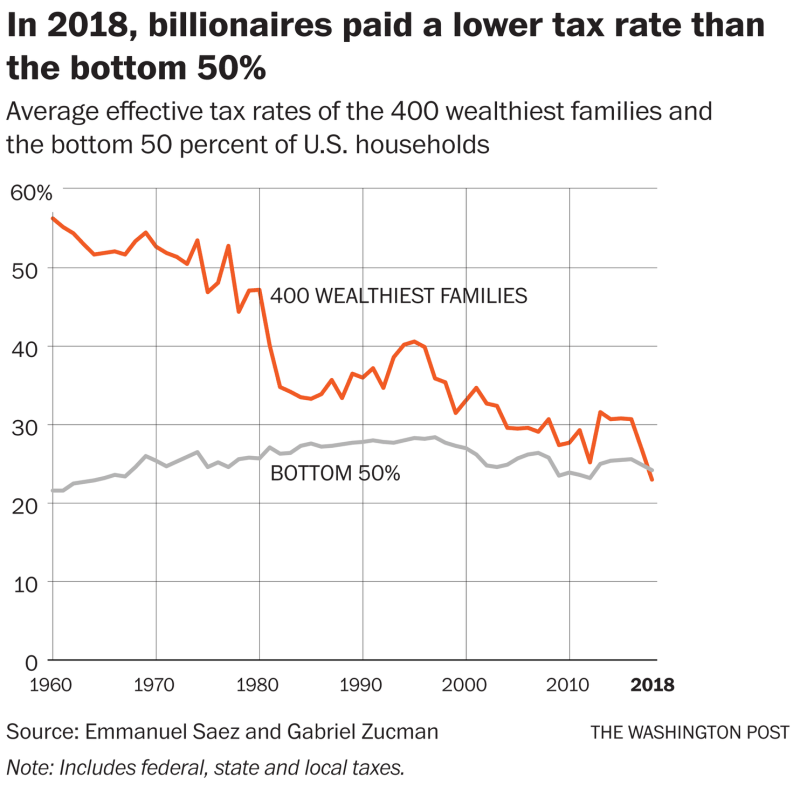 Billionaire hedge fund analyst Ray Dalio sums it up nicely. He maintains that the wealth inequality that exists in the U.S. may have dire consequences. Dalio has a net worth of $16.6 billion according to Bloomberg.
"Current wealth inequality is unsustainable and capitalism needs to be reformed," Dalio says. “We’re at a juncture. We can do it together, or we will do it in conflict, that there will be a conflict between the rich and the poor,” Dalio said on CBS’ “60 Minutes” in July.